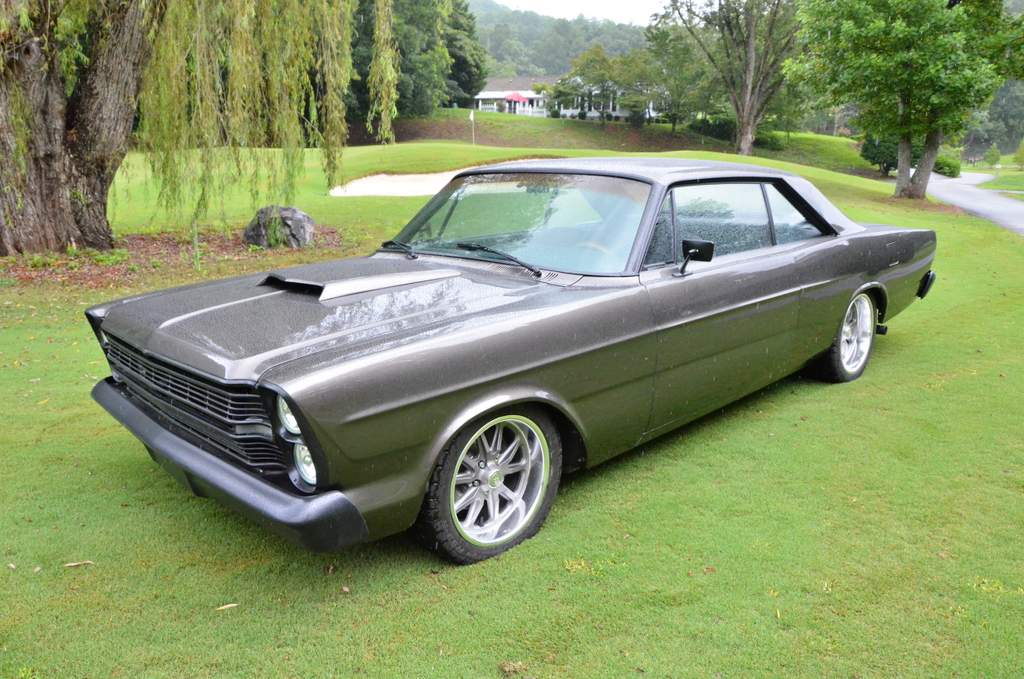 We will be the first to admit that when we first saw Richard “Buck” McNeill’s 1966 Ford Galaxie 500 sitting at the shop in line for restoration, we had our doubts. In a world where earlier Galaxies and Torinos and classic Mustangs rule, how would this somewhat-forgotten Ford fit in? Could this car be cool?

Buck and Dennis Steppe at Rebel Kustom Paint — the man responsible for all the work on this beauty  quickly had us eating our words. This Galaxie is definitely one cool ride. Everything about the car is top of the line and modern. Dennis and Buck have really created something unique and out of the norm here, and we love it.

Buck first decided to purchase the car after falling in love with it at a gas station.

“While it obviously needed work, the nostalgia of an old Ford and its long contour of body lines immediately screamed fix me up,” he admitted.

While it obviously needed work, the nostalgia of an old Ford and its long contour of body lines immediately screamed fix me up! — Richard McNeil

That’s where Dennis Steppe came in to play. To start the build off, Dennis and the crew went to work removing all the old paint and what Dennis described to us as “too much” body filler to reveal a car that was actually pretty solid and straight underneath.

He stripped the body all the way down to its bare metal, at which point a few typical rust spots had to be repaired, including a new trunk pan — all things typical of this type of build on an older muscle car. He stripped the engine bay, inner fenders and wheel wells and repainted in flat black to complement the flat-black trim that would come later in the build. He also sprayed it with Lizard Skin to both protect it from future rust and provide a sound and heat barrier between the drivetrain and the driver.

This Galaxie’s engine bay is clean and simple, yet full of high-tech components. A Fi-Tech Fuel Injection, a Vintage Air setup, an MSD 6AL, and an MSD billet distributor all adorn the 406-cube engine tucked between the flat-black fender wells.

Upon completing the basic bodywork, it was time to embark on the modifications. The duo shaved off the door handles in favor of a set of remote electric door poppers. They painted all the stainless and chrome trim flat black and also added a hood scoop from a 1969 Mercury Cougar Eliminator to the factory Galaxie hood to complete the look. Then, once the bodywork was perfect, they sprayed the body in Galaxie Gray paint and topped it with several coats of Matrix clearcoat. All this hard work and planning resulted in one sinister Ford Galaxie.

With years of body filler and who knows what else on the car, the best and only plan of action to ensure a slick finish on the new paint job was to take the Galaxie all the way down to its bare metal.

The original engine combo just wasn’t sufficient for a build of this level, as Buck plans on putting a ton of miles on the car, so power and reliability were a must.

“The most fun part of the rebuild was selecting a five-speed manual from its original three-speed automatic and coupling it with a freshened up 390 engine,” Buck told us.

The most fun part of the rebuild was selecting a five-speed manual from its original three-speed automatic and coupling it with a freshened up 390 engine. — Richard McNeil

Jeff’s Machine Shop in Tiger, Georgia, punched out the original 390 to 406 cubic inches and freshened the cylinder heads with upgraded valve springs to handle the Comp 28H-10 camshaft that provides a nice little thump.

To support that engine he ditched the original automatic transmission for a more exciting Tremec TKO five-speed setup from American Powertrain. To ensure proper modern reliability, a modern fuel injection setup from Fi-Tech supplanted the carburetor and providing easy cranking and performance no matter what the weather or altitude. Ensuring proper electrical function and safety throughout the car, he replaced all the original wiring with a new kit from Ron Francis Wiring.

All of this together makes for a powertrain capable and reliable enough to drive from coast to coast.

At first glance, these seats appear to be factory, however, they are much improved over the original units. Extra padding in all the right places turned the factory seats into something comfortable enough to sit in for hours without fatigue. The color scheme also works well with the exterior of the car.

To back up that coast-to-coast drivetrain, the Galaxie needed a killer interior full of creature comforts all while matching the looks of the rest of the car. Chris Turner at Faith Kustoms Upholstery in Franklin, North Carolina, took to the task of giving the factory front bucket seats just the right look. He added padding to make them more comfortable for those long hauls and covered them in just the right color combo to accent the rest of the car. Chris even modified the rear seat to look like a set of matching buckets. Dennis and his crew built the center console, which Chris covered to match the rest of the interior.

Once the comfort needs were out of the way, it was time to get down to business. Sticking out of that center console is a custom pistol-grip shifter designed to mimic the iconic Mopar shifters of that generation. A flip-up switch atop the Hurst shifter hides the button for the B&M line lock for when smoky burnouts are needed on command.

Tucked inside the inner fender, this FI-Tech Command Center houses the electric fuel pump that pressures the fuel before it goes to the fuel injection. Turning a regular mechanical fuel system into modern fuel injection.

The front of the console houses the Kenwood stereo controller for the trunk-mounted CD Player as well as the FI-Tech Controller which provides instant data to all the engines vitals as well as all the fuel injection tuning controls. Above the console, an under the dash Vintage Air air conditioning unit keeps the cockpit ice cold on those hot summer days and also provides heat during the winter months. The console also features a USB charger and an auxiliary jack — a must-have in today’s smartphone-driven world.

Simple, clean, convenient, and modern all accurately describe the console-mounted engine and stereo controls in the Galaxie. Everything is just a fingers length away from the shifter and easily sen from the driver seat. With the A/C controls just above it, basically everything you need is right here.

No road-trip machine is complete without a killer stereo system and this Galaxie has one. We detailed earlier the console mounted controls and the trunk-mounted CD player, in between those are a variety of Kicker speakers that pump out some awesome sound inside the Galaxie’s cockpit. The rear kick panel houses two Kicker 6×9-inch speakers. There are two more 5-inch speakers hidden behind the front kick panel, while an 8-inch Kicker sub under the driver seat finishes off the system.

Dennis said one of the hardest parts about this build was the lack of reproduction parts. The kick panel that houses the 6x9 speakers in the rear for example had to be custom made since a replacement could not be sourced and the original was unusable.

The little details and custom touches in this build could keep us talking for days, it is just impossible to mention them all. A couple of the coolest things we saw were the custom LED interior lightning as well as the Viper alarm system to help protect Buck’s investment!

Despite all that audio gear onboard, Buck’s Galaxie retains an often overlooked item when building a hot rod — a spare tire. Let’s face it, when buying a nice wheel, who really wants to buy five? However with Buck’s plans to drive this car, a spare tire was a must.

In fact, Buck told us he plans to drive the car to Maine from Georgia, pick up his father and head across country to Washington in the car.

What an awesome road trip, and this Galaxie is definitely built for such a ride and should handle it with ease. What better way to see the country than in a classic American muscle car? Be sure and say hello to Buck and his dad if you see them on the road!

You might have noticed in some of the photos the Galaxie is wet. The day we planned the photo shoot, in came an unexpected summer rain shower. We offered to come back another day and would have completely understood if Buck did not want to get this freshly built beauty out in the rain. However, he insisted that he built the car to drive and a little rain would not hurt it! Who can argue with that? In fact, Buck tells us he put over 600 miles on the car that same weekend!